Rubondo Island National Park
The largest island national park in Africa, Rubondo Island lies in the southern part of Lake Victoria (the second-largest lake in Africa!). The island is 26km in length, and varies in width from 3km to 10km.

Uninhabited for decades, it has until now been almost untouched by tourism. It has, though, become a sanctuary for threatened wildlife and has seen many species introduced over the years. With the opening of Rubondo Island Camp in 2013, the island has now become a wild safari destination – with almost a Jurassic Park feel to it. Access is by plane from mainland Tanzania, affording spectacular views over Lake Victoria.

History of Rubondo Island
Until the middle of the 20th century, Rubondo was home to a community of people whose livelihood was dependent on fishing. This all changed in 1965 when around 400 inhabitants were relocated and the Rubondo Game Reserve was formed.

Between 1966 and 1969 the Frankfurt Zoological Society introduced 16 captive-born chimpanzees to the island. Rescued from zoos and circuses across Europe, these animals were brought over in crates and relocated to Rubondo where they were given a new life in the wild. The chimpanzees clearly loved their freedom and quickly established a healthy breeding troop. Following on from this success, several other mammal species were introduced to the island, including elephants, giraffe, white rhinos and the rare suni antelope. In 2000, 37 grey parrots that were victims of illegal trade were rescued and released on Rubondo. The parrots rapidly took to their island home and they can now found all over Rubondo. With the opening of the lodge Rubondo Island is now open to the public and can be enjoyed by intrepid travellers wanting to explore this remote corner of Tanzania.

Activities on Rubondo
Visitors staying on Rubondo Island can take part in morning and afternoon activities, largely centred on Rubondo’s abundance of wildlife. A real highlight is a boat trip from Rubondo to Bird Island, an ideal way to enjoy the numerous bird species and perhaps to catch sight of hippo or crocodile. Fishing trips on the lake can be arranged, where catches can include Nile perch as well as many smaller species.

A nature walk around the island is a great way to explore your surroundings; your guide will lead you through the tropical vegetation and introduce you to its many resident birds, mammals and butterflies. It is also possible to take guided trips into chimpanzee territory. Although the chance of spotting the chimpanzees is at present relatively slim, we are noticing an increase in the frequency and quality of sightings as the animals become more habituated to the presence of humans. 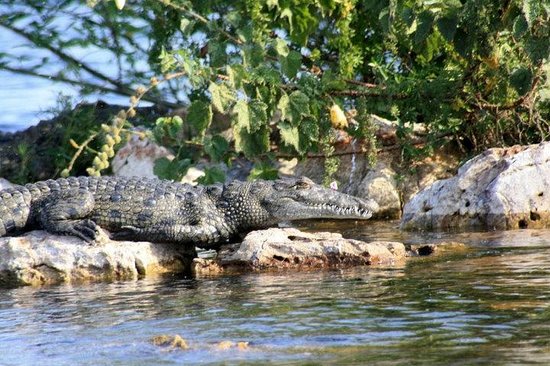 Animals
Some 80% of the island is covered in thick dense tropical forest, which has become a haven for a variety of wildlife. Given that it is such a small island, Rubondo is home to a surprising number of large mammals, albeit several of them introduced since the 1960s. Of particular interest are the wild chimpanzees, which were introduced in the 1960s. Populations of forest elephant and giraffe roam the forests, while crocodile and hippo are found in the lake. Sightings of the semi-aquatic sitatunga antelope are frequent, too, making Rubondo one of the best places in Tanzania to see this species.

Birdlife
Rubondo Island offers one of the best locations in Tanzania for birdwatching. With with many endemic and migrant species, birders will be in their element. Marabou storks are commonly sighted on the shores along with cormorants, darters, egrets and the striking pied kingfisher. Rubondo is also believed to have one of the highest concentrations of fish eagles in Tanzania, so it is worth keeping your eyes peeled for these majestic birds.

This website uses cookies to improve your experience while you navigate through the website. Out of these, the cookies that are categorized as necessary are stored on your browser as they are essential for the working of basic functionalities of the website. We also use third-party cookies that help us analyze and understand how you use this website. These cookies will be stored in your browser only with your consent. You also have the option to opt-out of these cookies. But opting out of some of these cookies may affect your browsing experience.
Necessary Always Enabled

Any cookies that may not be particularly necessary for the website to function and is used specifically to collect user personal data via analytics, ads, other embedded contents are termed as non-necessary cookies. It is mandatory to procure user consent prior to running these cookies on your website.